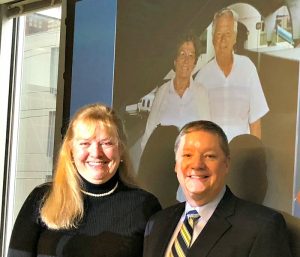 The Sewickley Public Library is pleased to announce a $500,000 annual gift from Raymond S. Suckling, a lifelong Sewickley resident.

Raymond Suckling, who died September 29, 2014, at the age of 93, was a World War II veteran who worked as a mechanical engineer at Koppers Company until his retirement in 1985.  The gift comes to the library from a donor-advised fund that Mr. Suckling set up through The Pittsburgh Foundation, named in honor of his parents, Raymond C. and Martha S. Suckling, from whom he received a substantial inheritance.  His father was an executive, first with Westinghouse Electric and Manufacturing Company, and then with Standard Steel Spring Company.  His mother Martha was a homemaker.  The bequest was finalized in December of 2017.

Mr. Suckling was a curious man with a love of learning who enjoyed travel and adventure.  He sailed on the Queen Elizabeth, flew on the Concord, took Wind Jammer cruises, visited the Panama Canal, and climbed the pyramids in Mexico. His gift to the library will forever keep his sense of curiosity alive through library facilities and programs in Sewickley.  President of the Sewickley Public Library board of directors, Lawrence Castner, says, “As the center for lifelong learning in Sewickley, our programs and facilities provide free access to a world of ideas and imagination through educational and informational programs.  We are very grateful for this gift, and will use it to not only preserve our historic building, but enhance our programming to meet the needs of our community through the digital age and beyond.”

Preliminary plans for use of the gift include strengthening the library’s endowment, making capital improvements to the building, expanding physical spaces for teen services and quiet study, and enhancing library programs and services.  Library director Carolyn Toth says, “This gift comes to us at a time when public funding for libraries faces ever-increasing challenges.  We just recently added a development associate to our staff to implement a more strategic fundraising effort to improve our library’s programs and facilities.  Mr. Suckling’s gift is an auspicious beginning toward those initiatives, and we intend to honor him by creating more vibrant spaces and enhanced services to benefit the entire Quaker Valley community.”

The Sewickley Public Library was founded in 1873 and has been at its present location since 1923.  It is funded in part by the Quaker Valley School District, and serves nearly 13,000 library card holders who visited more than 246,000 times in 2016.  An additional 33,000 people attended a wide variety of library programs.  In addition to public funding through the school district, the library is supported by private donations, Allegheny Regional Asset District and the efforts of the Friends of the Library.

Read more about the Raymond Suckling bequest on